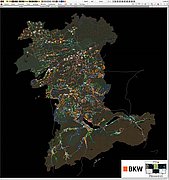 Modern technology and functions for the analysis and elimination of faults

Berlin, June 29, 2022 - As part of an extensive upgrade, the Swiss distribution grid operator BKW Power Grid has renewed the network control system PSIcontrol, which has been in use since 2009, and put it into operation on schedule. The future-oriented system, based on the version 4.9, offers innovative functions, such as those in the area of fault analysis.

With the new system, the causes of an interruption can be identified even more quickly and the power supply restored. The redundantly set up system is also suitable as a platform for integrating renewable energies such as photovoltaics or wind into the grid and thus meet the challenges of the energy transition.

In order to ensure maintenance for the next ten years, BKW has renewed not only the software but also the hardware. The implementation was completed within the planned three-year project schedule. This is the first stage of an extensive renewal at BKW. The implementation of further functional additions is planned for 2023.

The control center in Mühleberg centrally controls BKW's extensive power grid. At peak times, dispatchers monitor the approximately 22,000 kilometers of lines and the grid installations in the high and medium voltage areas of Switzerland's largest distribution grid, which is monitored and controlled by BKW Power Grid in the cantons of Jura, Bern and Solothurn, on 36 monitors.

The PSI Group develops its own software products for optimizing the flow of energy and materials for utilities (energy grids, energy trading, public transport) and industry (metals production, automotive, mechanical engineering, logistics). The industry-specific products, which are built from standard components, are sold both directly and via the multi-cloud PSI App Store and can also be customized by customers and partners themselves. PSI was founded in 1969 and employs more than 2,200 people worldwide.